MY TEACHING EXPERIENCE IN UAE BY DENNY VORECK


The American School for the Deaf (ASD) collaborated with the Zayed Higher Organization (ZHO) to provide educational services for deaf pupils in the United Arab Emirates (UAE). The ZHO requested two teachers from the US to teach American Sign Language (ASL) and English to deaf children and teachers of deaf children for eight weeks in February and March. ASD posted the advertisement regarding the request by the ZHO on Deaf Digest. After I read it, I applied for this lifetime opportunity without any hesitation because I always wanted to teach deaf children in a foreign country since I was 13 years old when I visited a Deaf school in Graz, Austria where my parents had graduated.
I was eventually selected as one of two teachers out of 30 applicants by the ZHO, which runs the children with disabilities programs in the state of Abu Dhabi in the UAE. The other teacher is Patricia Pangborn, a teacher at American School for the Deaf in West Hartford, CT. We agreed that I would teach deaf classes in Abu Dhabi, a capital of the country and she would teach in Al-Ain, 100 miles east of Abu Dhabi. After the ZHO learned that I am Deaf, they had some reservations because they never had a deaf teacher before and thought that they would have some communication difficulties with me.  Jeff Bravin, Executive Director of ASD, assured them that they would be fine with me.
On Saturday evening, January 30th I departed from Phoenix, Arizona, my residence for three years, and took a flight to John F Kennedy Airport. I arrived in the airport next morning. Andy Berke, Director of Transportation, greeted me at the airport and drove me to ASD. I discovered that the school campus had several feet of snow and since I did not have experience with snow walked awkwardly to my temporary residence.
From Monday, February 2nd to Wednesday, February 4th, Ms. Pangborn and I reviewed curriculum materials and developed the lesson plans for UAE students and teachers. We departed from ASD campus in the very early morning on Thursday, February 5th We took Etihad Airlines, which is owned by UAE entrepreneurs and flew for 13 and half hours.
On Friday, February 6th we arrived in Abu Dhabi. The ZHO driver greeted us at the airport and drove us to Armed Forces Officers Club and Hotel. We were overwhelmed by this elegant five-star hotel. We stayed at the hotel for a couple of days to acclimate to the Arabian Peninsula climate and time difference.
On Sunday afternoon, February 8th, Patty and I met with Nahyan, ASD student's parents at the hotel lobby. We had very productive two hour conversation covering various topics including education of deaf in the UAE.
On Tuesday, February 9th, I was so excited for my first day of work with Deaf UAE students and teachers today. A personal school driver picked me up at the hotel and drove me to the ZHO, a school site for special education students. Someone escorted me to the department of Hearing Impaired. Some minutes later, several male and female deaf students greeted me and asked if I am deaf. I replied that I am deaf, the same as them. We chatted to break the ice. We walked to the lecture room where I would be teaching. Approximately 16 deaf pupils and 10 staff were in the class. Male pupils and staff were sitting separately from their female counterpart. Most female students and staff wore headscarves. Male are forbidden to touch a female unless the male is a relative or married to her. I was caught off guard when a female administrator learned of my marital status; she announced in the class that she was going to look for Arab woman for me so I could live here. I smirked awkwardly and have to be open-minded to their different culture. I was pleased that I had a great start at the school. 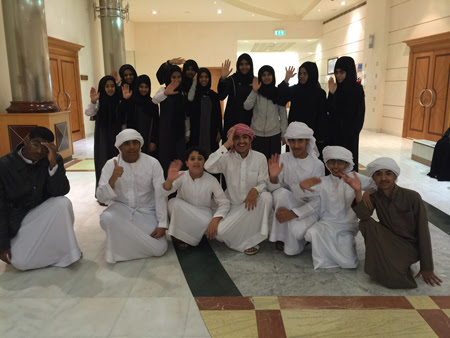 (UAE deaf students saying "Hello to the America")
On Friday, February 13, I left for Dubai, a popular tourist destination in the UAE and met a longtime friend, Helene and her little daughter there and visited a desert. 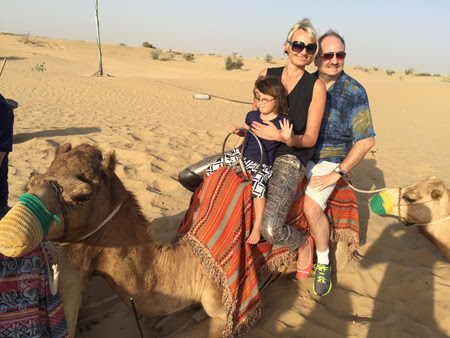 (My long-time Austrian family friend, Helene, her daughter, and myself riding on the camel)
On Friday, February 20th, the father of Nahyan, the UAE student attending ASD, picked me up at the hotel. We went to Qasr Al Hosn Festival in downtown Abu Dhabi. It displayed the culture and history of Abu Dhabi. The city used to be a desert town. After the discovery of oil, the city became a booming metropolis including a lot of skyscrapers. We toured different booths, dancing performance, and the fort. It was a first government building and palace during the birth of a nation - the United Arab Emirates. I learned about different parts of date plants, palm trees, dying the stuff, knitting with palm leaves, and history of the palace. 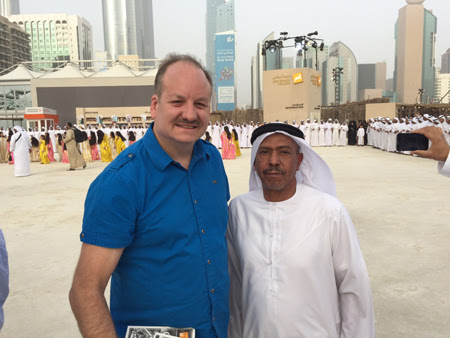 (Nahyan's dad and I toured at Qasr Al Hosn festival)
On Thursday, March 12th, Jeff Bravin, ASD Director paid a visit to my class with Deaf and Hard of Hearing students. He talked about the ASD program and had a discussion with Dr. Mariam, Director of the ZHO to allow female students to attend ASD. All female students in my class wanted to go to the US. Jeff also had a meeting with my Deaf and Hard of Hearing teachers in next class session. He gave a presentation about the ASD program and how did the UAE students fare at ASD. Some teachers asked about an oral program, and if it benefits Deaf and Hard of Hearing children's education. Jeff replied that it depends on an individual. They were impressed that Jeff and I are so well educated despite the fact that we could not speak. They asked us if there are deaf people in America like us. He replied again that it depends on individual and everyone is different. 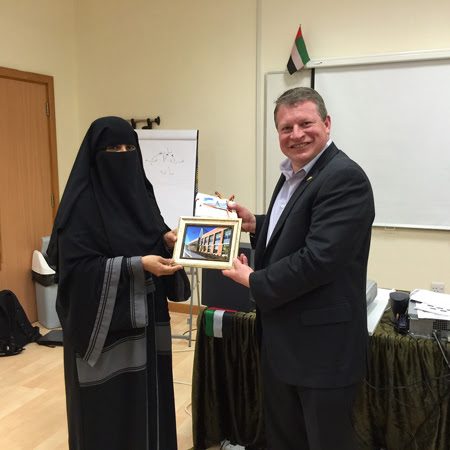 (Jeff giving ASD picture to Amoon, the principal of Deaf Section in Zayed Higher Organization)
On Friday, March 13th, Jeff Bravin invited ASD alumni and Nayhan's family for dinner buffet at the hotel. We had grand time and were chatting about different subjects. I realized that ASD makes a big impact on deaf community in the UAE because many deaf people know ASL. Some of them are ASD alumni. 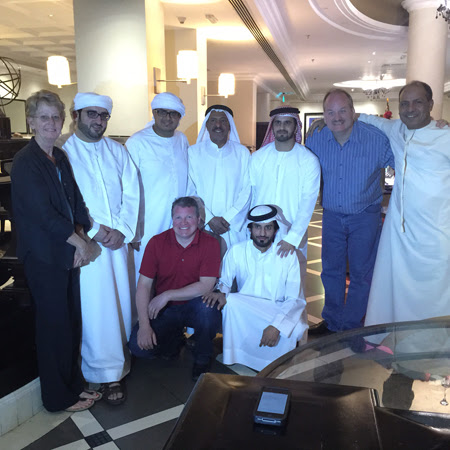 (ASD alumni, two fathers, Jeff, Janice Knauth, and myself at the hotel buffet gathering)
On Wednesday, March 25th, I felt sad because it was my last day with Deaf and Hard of Hearing students. Two months flew quickly. The students kept asking me if I would return, and I  replied that I didn't know. I told them that I promise that I would advocate on behalf of female students so that they would be allowed to attend  ASD one day. ZHO and ASD might make a compromise to send a female teacher with a group of female students to ASD.
On Thursday, March 26th,   I provided final ASL exams to the Deaf and Hard of Hearing teachers. Two teachers asked me to meet them at the mall after the exam and gave me a bag with a card and a small box. It was "Thank You" with signatures by teachers. I opened the box and was utterly shocked to find new Calvin Klein watch! I will never forget their generosity.
I am currently teaching PE class at ASD until the end of this school year. 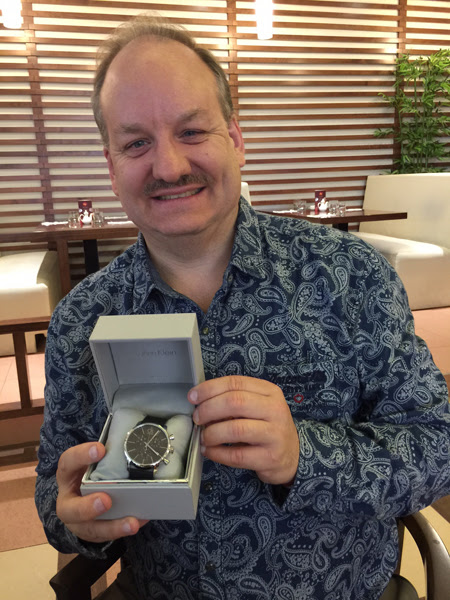